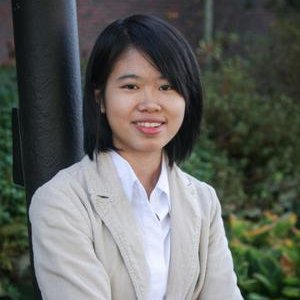 The CS Women Co-Chairs have asked participants who attended the 2015 Grace Hopper Celebration to tell us about their experiences. We have collected their responses and are making a series of blog posts about them. In this post, Yamin Tun describes her experience. Yamin was sponsored by CICS and Yahoo!

Which sessions did you attend?

What part of GHC did you find most helpful?

I found the workshop (Mastering the Technical Interview) one of the most helpful sessions. I found technical interview to be the most nerve-wracking experience of job searching since the decision of hiring is based mostly on such interviews. I got a chance to ask questions on how to prepare and perform in technical interviews to a female engineer at Palantir. She also encouraged us to apply for jobs without feeling constrained and discouraged from job listing requirements. She shared her experience that she didn’t apply for one of her dream jobs just because she lacks one job requirement in the job listing, while male tends to apply for jobs even if only 60% of his qualifications match with job listing.

Did you feel especially inspired or empowered by any of the sessions?

Clara Shih, CEO and co-founder of Hearsay Social, has shared her experience that most women faced in male-dominant tech industry. It was during a tech conference when 7 different men asked her to get a glass of water or show the direction of restroom when she was while she was “one of these guys.” The way she handled such shocking experience showed a good representation of women and even made her build a strong networking bound with those men who apologized her later in the conference.

Another inspiring session is Sheryl Sandberg’s talk. Sheryl opened her talk with shocking fact about women’s involvement in current industry: “The numbers for women in leadership aren’t moving and the numbers for women in tech aren’t moving,” Sandberg said on Thursday. As Sheryl said, women tend to think of their own flaws and get hindered by family commitment, resulting to shy away from their ambitions while men continues seeking for opportunities with less burden of society’s expectation and family commitment. Sheryl’s talk made me realize that such low statistics of female in tech and leadership is all due to a cycle between stereotypes on women and actual little involvement of women in tech and leadership positions. Low number of women in current tech industry creates society’s expectation of women to be soft-spoken housewives or secretaries rather than vocal technicians or engineers who build things. Such expectations further affects women’s thinking, resulting for fewer women to shy away from leadership and tech positions, which results in fewer women in important roles in today’s society. Sheryl said that despite the huge amount of effort of multiple organizations encouraging female involvement, as long as this cycle exists, the number for women in tech and leadership will still remains unchanged. As Sheryl suggested, the only way to break this cycle as a female is to start “leaning in” and build up confidence to go against deep-grained stereotypes of females. This inspires me to be more confident and more daring and seek more opportunities with a different mindset.

Which companies did you talk to?

Are there any ideas/events/etc. that you would like to see CS Women do as a result of this event?

Setting up a club named “Lean In” circle under CS Women would be a good idea. [I would also like to see] more discussion forums/workshops on topics like imposter syndrome, how to adjust as a female student in male-dominant classrooms, how to get back to academia or tech industry for married women, and other common issues that women face.

Did you interview with any companies at GHC?

I had interviewed with two companies: Cisco and Textio. I want to share interview experience with Cisco.

I have interviewed with Cisco’s Internet-of-things Team (IoT). I had a great conversation with one of the Distinguished Cisco IoT engineers, who did PhD at UMass Amherst in 1994. I heard from the engineer about what Cisco is doing with Big Data from billions of devices to make machine smart and autonomous. I had a chance to share my background and research interest in machine learning and computer vision. I got advice from him not just as an interviewer, but as a UMass alumnus. He gave me suggestions on making choices between doing PhD and working in industry and career choices.

In addition, I got to know many other female engineers from Cisco IoT team. One of the great experiences was when I got to sit next to a female product manager from Cisco team during Cisco dinner. She gave me a lifetime advice on networking, how I should behave as one of the few women in male-dominant tech meetings, and asked me to keep in touch with her.